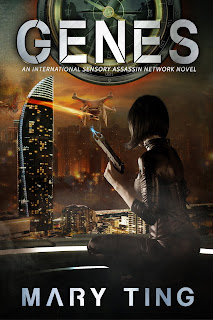 Blurb:
Allegiances will be tested.
Identities will be revealed.
No one is safe.

While searching for the HelixB88 anti-serum on the black market, Ava uncovers valuable intel that may help the rebels in their fight to bring down ISAN—the location of a hidden facility. But first, the insurgents must find the female citizens unexpectedly displaying powers without use of the Helix serum before ISAN captures them.

As the rebels join forces with other sectors, ISAN plans their destruction by using someone they don't suspect at the rebel home base. A traitor within.

Now, Ava must make a dangerous decision, one that could risk their capture—or worse. 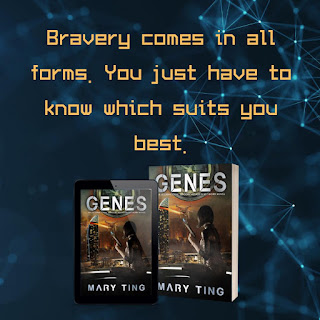 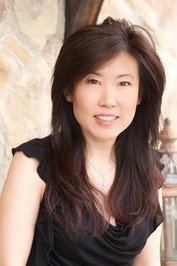 Mary is an international bestselling, award-winning author. She writes soulful, spellbinding stories that excite the imagination and captivate readers around the world. Her books span a wide range of genres, and her storytelling talents have earned a devoted legion of fans, as well as garnered critical praise.

Becoming an author happened by chance. It was a way to grieve the death of her beloved grandmother, and inspired by a dream she had in high school. After realizing she wanted to become a full-time author, Mary retired from teaching after twenty years. She also had the privilege of touring with the Magic Johnson Foundation to promote literacy and her children’s chapter book: No Bullies Allowed.

Mary resides in Southern California with her husband, two children, and two little dogs, Mochi and Mocha. She enjoys oil painting and making jewelry. Being a huge Twilight fan, Mary was inspired to make book-themed jewelry and occasionally gives it away as prizes to her fans. 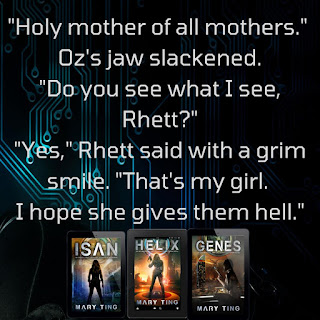 Told from Rhett’s point of you.

If Ava could see herself, the sight would have stopped her cold. Even Rhett was afraid. The hair on his arm rose. His goosebumps had goosebumps.
Ava had absorbed Mia’s energy. Blue light zapped and crackled not only through her, but around her like an electric storm. She became the lightning and wind, uplifting everything around her. The ground shook, walls trembled, and lightbulbs popped like gunshots. Centered in the brilliant phenomenon, she was Mother Nature about to unleash her wrath.
“Holy mother of all mothers.” Ozzie’s jaw slackened. “Do you see what I see, Rhett?”
“Yes,” Rhett said with a grim smile. “That’s my girl. I hope she gives them hell.”
Mia stood her ground. Rhett gave her credit for courage but she was a fool. Rhett knew Ava would make the right choice, so he didn’t try to stop her.
“Well, what’s it going to be, Mia?” Ava’s voice sounded as grand as her display of powers.
Rhett was learning something new about Ava every time she pushed herself, though he worried she might burst. He had no idea how her ability worked.
“I’m not going to apologize, you freak.”
Oh, no. She did not just say that.
“Uh oh.” Ozzie crouched lower. “Ava hates that word.”
Four massage tables zoomed across the room at a flick of Ava’s finger, boxing in the girls.
“Like this is going to stop me. Pathetic,” Mia spat.
Mia didn’t know when to quit. Ava didn’t want to hurt her, but she kept punching Ava with insults. Rhett had to do something.
Ava’s hands trembled. Her body was shutting down.
“No, they weren’t intended to hurt you, and they certainly won’t hold you in.” Ava shook her thin shoulders. “That was a distraction—this will do the damage.” Ava flicked her index finger. A metal tray flew off the counter like a rocket and collided with Mia’s face, knocking her head to the table. “The table is to break your fall, idiot. I was being generous. What about you, Ella? Want to walk with me or be carried out like your friend?”
Ella blanched and softened her stance, giving the impression of compliance. Her voice squeaked like a frightened mouse. “I was going to cooperate. I swear I was. I’ll walk.”
Poor girl. She shook with her arms crossed over her midsection.
The door slid open.
“Why are you all wet? What happened here?” Naomi cursed, her eyes darting around the wrecked room. “Are you guys okay?”
Ozzie pointed to Ava, gawking at her as if she was a goddess. “She did it. It was pretty awesome.”
Tamara laughed. “I should have been here earlier to see it all. The sounds did not do it justice.”
Reyna smoothed a hand over her face. “We’re in so much trouble. Zen’s not going to like this. It’s a good thing this room had no windows.”
“Well, at least we’re all going down together.” Rhett planted a kiss on his girl and supported her with an arm around her waist. When she’d stopped the bullets at Mitch’s apartment, she’d fainted. “You okay?”
Rhett gripped her shaky hand. So cold. All the warmth flushed out of her when Helix had diminished or had burned out. Or however her power worked.
“Yeah. Just a little lightheaded. At least I didn’t black out. I got a little carried away.”
“A little. Just a little.” Rhett chuckled to lighten the mood.
“Are you and Oz okay?” She examined him. “You’re wet.”
“Oz and I are fine. Do you want a change of clothes? We could try to find—”
“No. Let’s get out of here.”
Rhett was worried about her. How much could her body take?
Ava had practiced every spare second. Anyone else would be wiped out, but maybe someone like her didn’t need a lot of time to recover. If Helix could replenish her quickly, then perhaps it was all good.
“Come on. Someone want to help me drag this lunatic?” Ozzie’s shoes squeaked and squashed through two inches of water as he headed toward Mia. “Yup, Zen is going to flip out. Can we pretend it didn’t happen? Or do one of you girls have the power to put everything back together? Why can’t I have that kind of power? Why am I talking and nobody is answering me?”
“‘Cause you talk too much, Ozwald.” Rhett grabbed Mia’s other arm and hauled her up with Ozzie’s help.
Ozzie’s mouth scrunched together into a pout. “Ozzie. It’s Ozzie or Oz.”
How Rhett loved to mess with him, and Rhett knew Ozzie liked it, too, since he did the same to Rhett. It was the way they were. 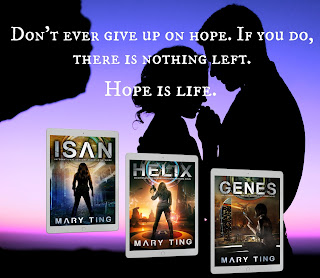 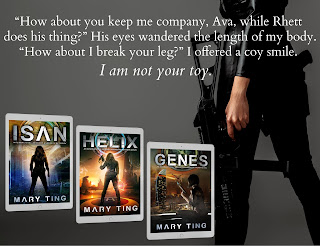